You are here: Home / Editorials / Editorial: Why the Sewing Community Must Attract Millennials

The morning at QuiltCon on opening day, I was waiting for the Awards Ceremony to begin.

I was setting up my camera equipment to shoot some footage for a Sewing Report story.

In the front row, I spotted Jacquie Gering, President of The Modern Quilt Guild’s Board of Directors, talking to a Baby Lock executive.

Gering was expressing how much she loves the Youth Quilts category.

Later in the afternoon, Gering and I met up for a quick interview and I knew in the back of my mind I had to ask her about it.

This was her response:

“The quilting community – if we don’t have young people we die.”

On the surface, this sounds a bit harsh and rather pessimistic.

But Gering is absolutely correct.

According to the 2014 Quilting in America survey, the $3.76 billion industry includes 16 million active quilters.

Well, not so much…

There was an overall decline in the number of quilters in the U.S. – with the “average” quilter being female, around age 64, with 20 years of experience under her belt.

Eighty-one percent of quilters are traditionalists, per the survey, and 35 percent enjoy modern quilting styles. (Quilters could choose more than one type)

When the “average” quilters are no longer around – what would be left of the sewing industry if we don’t attract the youth demographic?

There would be no QuiltCon, no fabric manufacturers, no new sewing machines, and no making things out of a needle and thread.

That is depressing to think about.

Outside the quilting community, I only know two people who quilt – one of them being my college roommate who just finished her first one.

Because of my love of sewing, I have become an evangelist of sorts for the industry. It’s why I started Sewing Report – to try and reach more people and help make it easier for those interested in learning to access information. I’m on a personal mission to make a difference in this area.

Despite my extreme levels of enthusiasm, I have not even been able to convert one person to our side. Quite a few women tell me their mother or grandmother sews, but they just don’t seem to see sewing as something for them.

Perhaps young people see sewing as an icon of the past, like record players or having a pager.

It’s obvious though, that we are just not getting through to most of the millennials.

“It’s all about the beginner,” Mary Fons said in the Quiltonomics article, February 2015. “We simply have to help non-quilters who want to make quilts learn the craft in an approachable, 21st century way. Quilts are still relevant and people will always want to make them. The challenge is that from now on, no one is learning sewing skills at home. So when a person wants to make a quilt, they are starting at zero. If they don’t have friendly, interesting, engaging ways to learn – we’re sunk.” 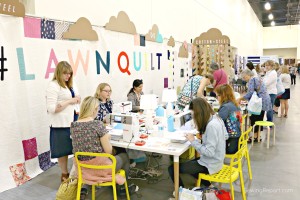 When I tell people I quilt, they are at first taken aback. I can understand that. They have the picture of the “average” 64-year-old quilter with her Civil War reproduction fabrics and old school perspective as a generalization.

I’m Asian, work full-time in a professional setting, and have chosen to be childless. It’s very difficult for me to meet like-minded women, let alone like-minded women who also like sewing.

So I still feel like an outsider in the sewing/quilting world in many aspects.

While at QuiltCon, the majority of my interactions were positive – people were nice, we made small talk, and I did indeed have a wonderful time.

That’s not necessarily the case online.

Just this week, I worked on a project as a service to the quilting community, and instead of seeing it as that – it was chewed up and spit back out at me. I highly doubt the comments people made would ever be said to my face, and it bothered me. And I’ll be honest – I found it frustrating that individuals would be disrespectful and find a way to complain about something I’d provided to them for free.

(I was not paid by The Modern Quilt Guild/QuiltCon to cover the event and spend four days shooting hours of video – then days of editing and writing. It was my own idea, and I spent a LOT of time and money to accomplish the project.)

Being a part of quilting Facebook groups and reading comments on various pages and websites gives one a much different impression of our community, and not a positive one.

Is this really how we want to portray ourselves to those we need to join our folds?

We must embrace everyone even remotely interested in learning to sew, support them, and be kind to one another.

Over four days wandering around the Pasadena Convention Center, I talked with hundreds of people – including most of the vendors at the show. It was interesting and hopeful to see so many younger people working within the industry – like Aaron Hoffman, Bernina’s Philipp Ueltschi, Quilty Box owners Patrick and Ronnie Claytor, and Patchwork Threads owner Lindsay Szechenyi.

Roxanna Eke, who works in marketing for Hoffman Fabrics, had literally just started the job and was already blazing a trail – sharing some of her out of the box ideas with me at the booth. (That gal is well on her way to being a rock star in her field!)

Everyone in the sewing industry I spoke with was extremely transparent about the fact that they’re looking to reach young people. Failure is not an option.

Hoffman mentioned that his 84-year-old grandfather, Walter, didn’t quite understand the new fabrics from the Me+You collection. But the company is standing behind Aaron’s vision and clearly see the contemporary batiks as a way into the future.

To the sewists and quilters who have decades of experience on me, I am asking you to be flexible and accept changes in this community. To teach your children and grandchildren how to love it. To stop the obstinence and criticism of anything different than what you’re used to.

When we moved into a new home a couple years ago, I was thrilled to find a quilt shop about a five minute drive away on Google Maps. It’s quite roomy inside, and the ladies who run the store are very nice. But there is something that stops me from patronizing the business, except for the occasional notion. The shop does not stock any modern fabric lines, and the owners just don’t seem interested in switching up the current inventory of fabrics that don’t appeal to my tastes. It’s their shop and I completely respect their right to stock whatever they want, but since there’s not much there for me – I purchase the majority of my fabric online.

I understand that any kind of change is often difficult, but as someone who would like sewing to still be a “thing” when I am 64 – we’re going to have to put aside differences and band together to find new and effective ways to promote and encourage more people (women and men) into the ranks. The industry has to transform in order to survive.

We ALL win when more people start up sewing.

Are you with me?

UPDATE: How to Attract Millennials to Sewing