Quilters are out in full force in Savannah, GA this week for QuiltCon – but out of the 1,500 submitted quilts – who won this juried show?

The winners in 13 categories were chosen by 2017 judges Kristy Daum, Elizabeth Spannring and Erica Bonkowski.

From the maker: “This quilt is foundation paper pieced from solid fabrics, and the inspiration for this quilt was a princess cut diamond.” 98 x 98 inches, 2016.

From the maker: “I wanted to make a quilt that was rooted in tradition and technique but employed a modern, flexible approach that allows for multiple versions of the same motif depending on use of color and gradations.” 69 x 70 inches, 2016. 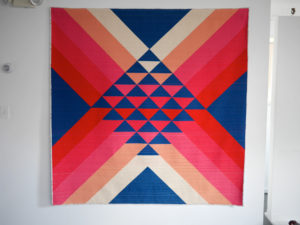 From the maker: “Religious texts mention few women, unfortunately, for there have always been great women. We know of Mary, the Madonna, because she was mother to Jesus. Often, I look beyond the walls of my home to find personal value and purpose, but as I created this quilt, I was reminded that my greatest power and influence is as a mother and in what I teach my children to become. As Mary was, I too can be a mother to greatness. This quilt was born at QuiltCon 2016, inspired by the score for ‘Get Your Curve On’ featured in The Improv Handbook For Modern Quilters by Sherri Lynn Wood.” 49.5 x 75.5 inches, 2016.

‘Not Easy Being Green’

From the maker: “I decided to use bits of my leftover hand dyed fabrics and make small 4 patch blocks, not knowing what I would do with them. I decided to add strips in a log cabin effect. Still not sure of what I would do with them, I added the white fabric for negative space, then used a quilting design similar to the quilt blocks to complete the piece.” 40 x 54 inches, 2016. 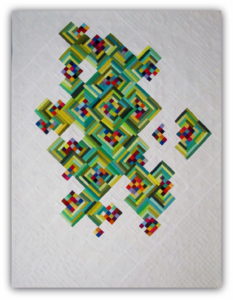 ‘Not Easy Being Green’ – Pieced and quilted by Mary Keasler

Judging was based on technical skill as well as creativity and originality, and the competition was fierce.

“Bling was one of the largest quilts we judged, and it was also a close-up perspective of a small object — a diamond,” says Erica Bonkowski, one of the 2017 judges. “The contrast really made a huge impact and it was the clear winner for us all.”

“This year’s winners bring a level of talent and originality and demonstrate a clear awareness of design principles,” says Kristy Daum, another 2017 judge. “The ways in which they have uniquely brought those concepts together is something artists, designers and quilters of all skill-levels can and should admire. Let this assembly of quilts be your textbook, and I have confidence that you will not be disappointed.”

QuiltCon, the international modern quilt show and conference, is now in its fourth year, and making its east-coast debut in Savannah, Georgia. The show opened Thursday with an award ceremony for the quilt show winners.

The show continues through Sunday, February 26.

About QuiltCon: Presented by the Modern Quilt Guild, QuiltCon is the largest modern quilting show of its kind. Each year, the four-day quilt show attracts thousands of attendees from around the world for workshops, lectures, panels and more. The juried quilt show features nearly 400 stunning modern quilts and dozens of vendors and exhibitor booths. Show and lecture passes are available at the doors, and a schedule of events can be viewed at quiltconeast.com/schedule.

About The Modern Quilt Guild: In less than ten years, the Modern Quilt Guild has expanded rapidly to include nearly 12,000 members in over 190 chapters worldwide. The guild’s mission is to encourage the growth and development of modern quilting through art, education, and community.